Finding a book is easy using online library catalogues and simple keyword searching. Start with the School’s catalogue to see if it’s in our library. If it isn’t, use Trove to see if it is in another library in Adelaide such as the University of South Australia.

You do not need to log into the catalogue to search it.

Once you have registered as a borrower with the library, you can also login using your student login and password to renew books (not high demand).

Try the lists in the top left-hand corner of the catalogue to find the reading lists for your course.

Trove helps you find and use resources relating to Australia. It’s more than a search engine. Trove brings together content from libraries, museums, archives and other research organisations and gives you tools to explore and build.

Join Trove for free and you can add the libraries you are a member of to your profile. These will then be highlighted in your search results.

Art e-books can be accessed from a variety of sources which are described below:

The starting point for most image searches is Google Images. However, finding high-quality images can be difficult and there are different approaches you can take.

If you are looking for work by a specific artist, you can check if there is a museum or gallery devoted to that artist’s work or browse the collections of the major galleries/museums (see our Galleries page). Benezit Dictionary of Artists (part of Oxford Art Online) lists museum and gallery holdings at the end of each artist’s biography.   If you are searching for a contemporary artist, locate their website or find out which gallery represents them and go to that gallery’s website for high-quality images.

Alternatively, you can check our page on how to Find a Person.

If you are looking for a specific artwork, find out who owns the artwork in question (Wikipedia can be very helpful here, however, do not rely on the image you find there).

If the artwork is owned by a gallery or museum, go to their website and search for the artwork there – this is where you will find the most accurate image of the artwork.

If you are uncertain what you are looking for, you can use keyword searches on Google Arts & Culture or Google Images to locate an artwork, then look for the owner. Alternatively, you can browse one of the image collections  below(all of which have high-quality images).

Google has partnered with 1,000 museums and galleries around the world to put high-quality images on their works online. You can search by keyword; browse by artist, gallery or topic and take virtual tours of the galleries. Originally called the Google Art Project, it is now known as Google Arts & Culture. It is a more reliable source of images than Google Images.

If you are looking for an artist, art critic or art historian, there are multiple places to search. The first question to ask: is the person Australian or not?

The primary place to search for Australians is Trove which searches the following biographical databases:

There are multiple sources to check:

The Dictionary of Art Historians is a free, privately funded biographical dictionary of historians of western art written and maintained by scholars for the benefit of the public. It became associated with the Department of Art, Art History, and Visual Studies of Duke University in January of 2010. From 2016 on, it has been sponsored by the Wired! Lab for digital art history & visual culture. Initially conceived as a methodologic tool for English-language readers, it seeks to compile the documented facts of an historian’s life in order to serve as a background for understanding a specific text and the historiography of art. The DAH was begun in the fall of 1986 as a notecard project by indexing the historians cited in Eugene Kleinbauer’s Research Guide to the History of Western Art (1982) and his Modern Perspectives in Western Art History (1971), Heinrich Dilly’s Kunstgeschichte als Institution (1979) and some of Kultermann’s Geschichte der Kunstgeschichte (1966). In 1996 it was input electronically and in 2002 migrated to the internet. In 2018, the project underwent a major redesign and is again in active development. Subjects selected for inclusion are based solely by their reference in the historiographic literature (see bibliography link) and are not the selection of the editors.

Part of Oxford Art Online, Benezit is one of the most comprehensive and definitive resources of artists’ biographies available. Revered for its global scope and its excellent coverage of European artists, Benezit’s distinguishing features include its entries on obscure artists, historic auction records, and over 11,000 images of artists’ signatures, monograms, and stamps of sale. (Ask the librarian for the login and password.)

Oxford Dictionary of National Biography (access via the NLA)

National Museum of Women in the Arts 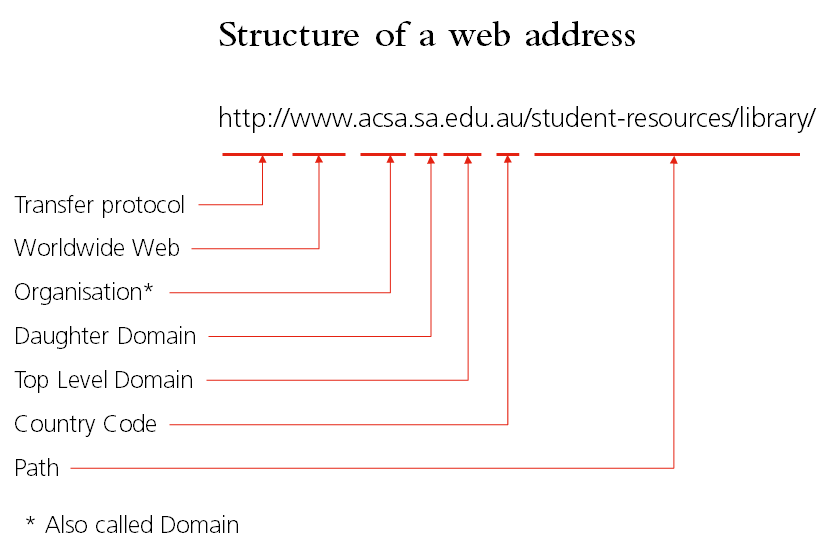 Structure of a web address

Web addresses follow a specific structure and knowing this structure will help you sort results quickly.The diagram above sets outs the structure of a web address.

So what should you look for?

Getting more out of Google

There are many way to improve the results you get from your Google searches: some are included in the Research Your Topic page. This section will introduce you to a lesser-known feature of Google: Google Tools. Tools appears once you have started a search; click on it to reveal the selection of tools. This selection reflects the type of search you are doing.

Google Tools can be found under Google’s search box on the right-hand side, as shown below. Click on it to reveal the tools.

The Google Tools feature lies under the search box on the right-hand side.
Although it appears on most types of Google searches (Google Scholar is an exception), it is most effective with Image and News searches. Click on Tools to reveal the Tools selection.

The selection of tools for Google News allows you to choose either the web or Australia, news organisations or blogs, date (recent), and sorting results by relevance or date.

Finding a journal or magazine article

When searching for articles and/or journals (magazines), there are two ways to approach to this:

Searching for a topic

When searching for a topic, there are three main places to search:

Using Trove or Google Scholar will generate a list of articles that you can then search the databases for. If the article is available on open access, you will be able to link to it directly from Trove and Google Scholar (see video below to learn how to search Google Scholar). If it isn’t open access, then follow the guidelines below on searching for a specific article/journal.

Remember to get the login and password from the librarian for Oxford Art Online and Very Short Introductions.

Using the National Library of Australia

Searching for a specific article/journal

The School has subscriptions to ARTAND Australia, Artlink, Art Monthly Australia, Artist Profile, and Eyeline. These journals are available to read in the Magazine Reading Room but are not available to borrow. You may however photocopy or scan articles

If you know exactly which article/journal you want, then use Trove to identify the database the journal is located in, then refer to our database list to identify the appropriate database and how you access it. Once you have located the journal, you can use the year, volume and issue to quickly locate the article you want.

Q.What’s the difference between a journal and a magazine?

A. Articles that have been through peer-review have been independently assessed by experts in the field and are considered to be more scholarly.

A. Open access means that a scholarly article is freely available on the web to read. If an article is not open access, you will generally have to go to a library with a subscription to access it.

Q.Why can’t I find the most recent articles in JSTOR?

A. There are two possible answers: the first is that JSTOR is subject to publisher embargoes preventing them from including the most recent content. The second is that the journal has moved to another database or publisher and sometimes that database is not available through the NLA.

Articles published by Australian (and New Zealand) newspapers after 1955 can be found in either the Australian and New Zealand Reference Centre  or Factiva databases, available via the e-resources page of the National Library of Australia.However, it can be a bit hit-and-miss for newspaper articles between 1955 and 2000. Check the list of newspaper databases on the NLA’s e-resources page.

International newspaper articles can be searched via various databases (such as Factiva) available through the e-resources page of the National Library of Australia. To locate the most appropriate database for your research, browse the Newspaper category on the e-resources home page.

This Guide will help you locate information for your assignments, provide some assistance in writing your assignments, and provide links to useful online resources and tools. There is also a section on practice-led research for third-year and Honours students.

We acknowledge the traditional owners and custodians of country throughout Australia and acknowledge their continuing connection to land, water and community.

We pay our respects to the people, the cultures and the elders past, present and emerging.